Ann has won many hats in the past from being a student of math and chemistry at university level, an IT professional and an NGO practitioner to her now current occupation which is farming. She’s been farming for the last 3 years and decided to draw on her university background to help her succeed in it. A proper soil analysis was her first step..

“I’m a scientist and I like to work with information before embarking on something. I do not like to operate blindly. For this reason taking a soil analysis made perfect sense. I needed to know what was in the soil and how to ensure that I farm successfully using this medium.”

Ann has seen the benefits of soil analysis, key among them being saving fertilizer costs and preventing disease. Ann who primarily farms tomatoes & capsicum struggled with blossom end rot disease and was able to draw a connection between low calcium levels in her soil and the occurrence of the disease.

“After we corrected the calcium deficiency in the soil, I noticed that the cases of blossom end rot reduced drastically,” said Ann Muturi during a phone interview.

According to CropNuts Agronomist Amos Mwitio this is very possible because one of the causes of blossom end rot is low calcium in the soil. He explained how a healthy balanced soil can help a farmer prevent disease by saying that it is the same way a child who eats a balanced diet has a boosted immunity and can fight off disease and disorders.

In this particular case calcium, which Ann lacked as shown in her soil test, is important in strengthening a plant’s cell wall. A strong cell wall makes it difficult for pathogens to penetrate and cause disease. Ann who is a proponent of soil testing because of the benefits that she has experienced says that it saved her money because at one point her soil test revealed that she did not need any fertilizer because her soil was healthy.

“What surprised me is that they (Cropnuts) were telling us that our soil already has a lot of nutrients and we do not need to add extra and I was like are you sure? And I was like okay let’s try it and actually the crop grew,” said a shocked Ann Muturi during an interview at her farm.

Barley farming in Kenya is setting new yield records as witnessed in various barley trials conducted in Timau, Meru County. Trials are a huge part of making progress in farming, and back in September 2018 we harvested something truly special. A plot of barley – 10 metres long by 2 metres in length – that […] 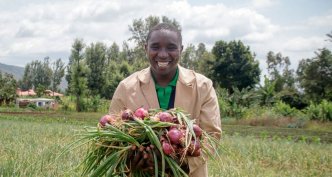 Onion farming is popular in Kenya and Africa because of the great demand the crop commands. We met up with James, one of our successful onion farmers to tell us his story. Onion Farming Profitability James Mbogo is a farmer at heart. For 7 seven years now he’s been tilling his one acre farm at […]