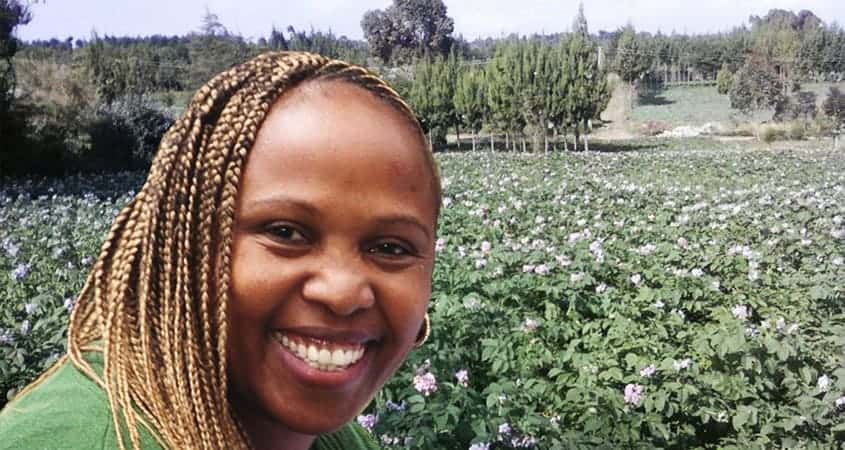 Successful Potato farmer story. Growing potatoes successfully is no longer a mystery. In the misty rolling landscape of Kinale in Kiambu County, lies two potato farms. One belongs to Ms. Mwihaki and right next is her’s – is her cousin’s Jane potato farm.

Potato is a common crop in Kinale and Mwihaki has grown up seeing her parents farm all manner of crops including potatoes. This time it was a little bit special for her. Because she was growing her own potatoes on her own one acre farm for the first time.

It was easy for her to simply do what she has seen her parents do all these years. But Mwihaki sensed that to write successful potato farmer story, there could be a better way other than what she’d already experienced growing up.

Jane, Mwihaki’s cousin, went straight and bought some planting fertilizer as is the norm with farmers in the area. Mwihaki, however, did pause and wondered: What if she did a soil test first before investing any money in planting and top dressing fertilizer?

With the help of Daktari wa Udongo, Benson Karanja, Mwihaki got her soil tested first with CropNuts. And after 7 days, she got her soil analysis results together with best fertilizer recommendations for growing potatoes in her soil (what fertilizer to apply and what rates to apply) for a maximum yield of 30 tons of potatoes per hectare (=12 tons per acre)

Instead of going for the planting fertilizer straight away, Mwihaki applied the soil recommendations in her report first. Her soil had a low pH and low Calcium – which she rectified by applying Dolomitic Lime and Gypsum.

“The first photo is my one acre farm in Kinale, Kiambu County. The second one is my cousin’s plot which is next to mine. We bought the seeds from the same market (Soko Mjinga) and planted around the same time. All my cousin did was to use planting fertilizer which she bought from the Agrovet shop. I took my soil for analysis first and followed the soil recommendations with Daktari wa Udongo Benson Karanja’s guidance. WHAT A DIFFERENCE! Same field, the distance between the two plots is 400 metres apart! Can’t wait for the harvest. Thank you Daktari wa Udongo!” – Mwihaki Ndungu

Daktari wa Udongo is CropNuts’ soil testing and fertilizer advisory service for small scale farmers. The main objective of the the service is to deliver timely and integrated fertilizer recommendations to the smallholder farmer by SMS, which gives them the knowledge and advice to improve their crop yields.

By utilizing this service and following through with the recommendations given, small holder farmers are able to improve the productivity, profitability and sustainability of their farms.

Barley farming in Kenya is setting new yield records as witnessed in various barley trials conducted in Timau, Meru County. Trials are a huge part of making progress in farming, and back in September 2018 we harvested something truly special. A plot of barley – 10 metres long by 2 metres in length – that […]

Ann Muturi, a greenhouse farmer in Kenya’s Kiambu county, has a capsicum farming success story that will rekindle your hope in tomato & capsicum farming Successful Graduate Farmer Ann has won many hats in the past from being a student of math and chemistry at university level, an IT professional and an NGO practitioner to […]