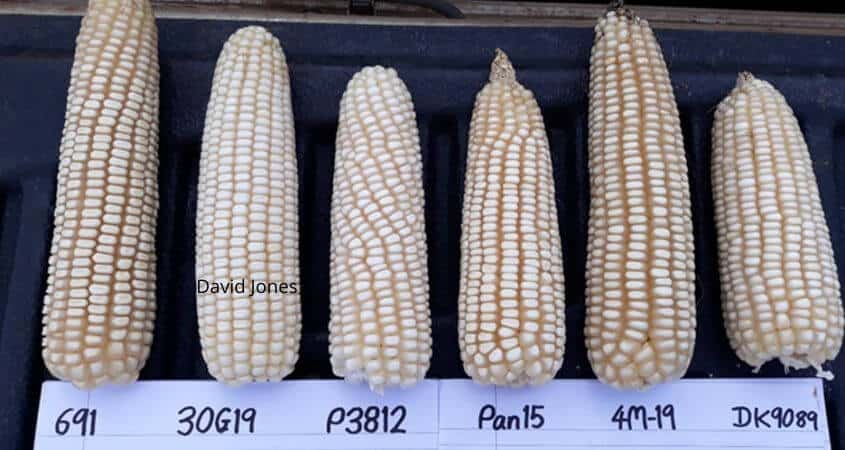 Maize varieties grown in Kenya, their strong attributes and their vulnerabilities, especially to certain pests & diseases as tested in our maize crop trials.

Still arguably the standard for yield despite being released in 2001. In most highland areas it requires 160 days to maturity. Good disease resistance and as our fungicide trials showed, fairly low response to fungicides.

Never quite reached the popularity of 691, but to be candid it is a clone of 691; no advance in yield and 691 already has good standing power and disease resistance, giving growers little incentive to grow 683.

Average standing power. Lodging is definitely the weakness of this variety despite its yield potential being right up there with 691. 10 days earlier to maturity in most areas, and produces brilliant white grain

Large, stubby cobs over 14 or 16 grains around – often more than one per plant. Rust needs watching from an early stage, but just as stiff and high yielding in my experience. If anything at low populations it is more forgiving than 691, producing more cobs where planting suffers. Cobs tend to be low on the plant but droop reasonably well.

From the little I have seen of this maize variety the yield potential is very high, but the Rust susceptibility for such a tall variety is not an attractive combination. A classic multi-purpose variety and one that I would not want to cut with a combine given how high the cobs can be.

Stands well, but not up to the Kenya Seed maize varieties in terms of yield. Possibly a bit stronger on Rust and Leaf Blight. More

Gets Rust in any environment, but reasonable standing power for such as tall variety. Frequently double cobs. Of all the variety plots I have sprayed for Fall Armyworm, getting coverage on the silks of 6213 with a knapsack is quite a task given how high up the plan they are!

A 5-10% yield advantage over 6213, and possibly less Northern Corn Leaf Blight in my experience. Great for livestock farmers looking for forage but not a commercial grain maize variety. More

As you would expect from a variety released 33 years ago, the yield is easily 40% less than more recent introductions. Tall, lodged badly in 2017 with the late rains in Uasin Gishu and Trans-Nzoia. Grey Leaf Spot resistance is poor

Another stiff, short variety that will really suit a proper plant population. With a high clearance sprayer the short crop allows much later Fall Armyworm sprays and fungicides – which is handy as it tends to be amongst the earlier maize varieties to show Leaf Blight.

Not quite as strong in the straw come harvest, sometimes stands well but can collapse very late on. Slightly earlier than 691. Group B herbicide tolerance allows use of nicosulfuron herbicide which would be transformation for growers struggling with grass weeds if or when it arrives in Kenya. One could argue that maturity and altitude suitability are a complete anachronism without eliminating weed competition, getting soil structure and nutrition correct.

As many of you know, I am increasingly skeptical of the standard advice to plant maize at 50,000 – 55,000 seeds per hectare – almost to the point of concern about how this affecting our yield potential.

I can understand that the origin of this advice was with tall varieties such as 614 that present a serious lodging risk is plant density is too high, but are many of our modern types equally susceptible?

This year I would encourage growers to do three things; firstly measure the germination of the seeds they are buying as a matter of course.

Secondly, assuming the planter is working accurately, measure the number of plants established at the 3-4 leaf stage and work out the seedbed plant loss %.

Thirdly, if you are growing a variety with reasonable standing power, plant a small area at a higher seed rate – perhaps 80,000 seeds/ha – to see how it stands up and yields.

NOTE: Weak standing power does not mean a bad variety, the above are all useful varieties for specific purposes in their own right – but be wary of planting too thick.

The importance of doing this on your own farm cannot be overstated. Root anchorage varies with different varieties and soil types, for example 42,000 plants/ha of 4M-19 on the left lodged badly on one pumice soil where several other much taller varieties remained well upright.

4M-21 on the right has much improved standing power, and on heavy Black Cotton 80,500 plants/ha was not a concern for the variety.

Finally, some growers are considering planting on narrower rows down to 20 inches (50cm) to improve yield and give plants more space within the row. The data to support this is limited, particularly with our varieties in our environment, and is something we will explore in a later edition of #ThinkAgronomy.

For now, think this through carefully. Narrower rows make it far harder – and slower – to spray the crop for Fall Armyworm with knapsacks which is likely to be a regular operation for most maize farmers in the region.

Editors Note: This article is based on our crop trials done in 2018. To read the latest article on maize varieties for 2020 please click here