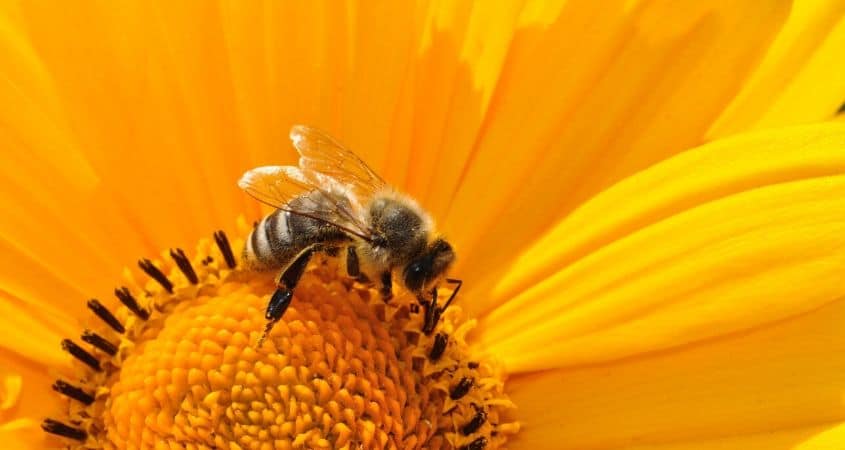 Pollinators are essential to the production of many of the micronutrient rich fruits, vegetables, nuts, seeds and oils we eat. In fact, close to 75 percent of the world’s crops producing fruits and seeds for human consumption depend, at least in part, on pollinators for sustained production, yield and quality.

The diversity of food available is largely owed to bees and other pollinators. But alarmingly, in a number of regions, pollination services are showing declining trends.

Rampant misuse and overuse of chemical pesticides pose a great threat to bee pollinators and, to an extension, pose a risk to food security.

With the neonicotinoid pesticide ban already force in the EU by the end of this year, and the concerns this has raised among the farming community of what the other options are; some might ask how the use of pesticides is affecting indigenous pollinators here in Kenya.

Subsistence maize farmers, the majority, use very little fertiliser, let alone insecticides, except for situations such as the FAW outbreak, and potatoes, the second largest crop, usually require only fungicides.

However, in higher value cash crops and export crops such as coffee, beans, tomatoes and various fruit crops, insecticide use can be high. Recent press coverage has shown residue levels on local produce such as tomatoes to be above international health authority levels. Indeed, the majority of small holder farmers, though aware of the various risks of using pesticides, do not follow label instructions, and apply pesticides without due care or concern for PPE, application timings, pre harvest intervals, or pollinator activity.

There is general consensus that the amount of insecticides being used in East Africa is increasing, and with this, the impact of those chemicals on local fauna.

There are over 40 neonicotinoid products registered in Kenya for use on crops ranging from coffee to tobacco, wheat and roses. African honey bees have been shown to be more sensitive to neonicotinoids than European honeybees.  Speaking of European bees, here’s an interesting article about Mining Bees in the UK on Bee Life.

Around a third of the pesticides approved for use in Kenya by the Pest Control Product Board (PCPB) are not approved in Europe because of their impact on human or environmental health. Pesticide labels show toxicity for humans but rarely LD50 for insects or pollinators – and with the low awareness about pollinators, and poor pesticide handling, it is unlikely that even label changes would cause pollinator related changes at the small scale farmer level.

However, there have been widespread and fairly rapid impacts in chemical use among export growers, as top down directives directly impact the pocket of the grower. Revision of MRL levels trickles down to a reduction in the use of chemicals and improvements in the handling of pesticides on crops by farmers involved in those value chains.

Thus, the neonicotinoid ban in Europe is likely to lead to similar knock on effect on neonicotinoid use in Kenya, which, though likely only restricted to export growers, is sure to have some beneficial impact on the country’s pollinators. Should the PCPB decide to follow EU’s suit and ban this class of chemical for outdoor agriculture, it might spur a shift toward, where possible, more biological pest control options.

Bees As Pollinators Of Agricultural Crops

Pollinators in Kenya include the various types of bees, flies, butterflies, birds and bats. Some of the important cash crops are dependent upon pollinators including the Cucurbitaceae, Eggplant, Passionfruit, mango and so on.

It is well known that papaya plantations in wilder areas produce more, better quality fruit, due to the abundance of pollinators (Hawkmoths) and the reduced distances between habitat and plantation. Many coffee varieties can self-pollinate, but need pollinators for higher yielding and better quality crops. The Robusta variety depends on pollinators.

Crops such as eggplant and tomato are buzz pollinated, so it is important that there are places nearby for pollinators to get nectar, too – such as blocks of bush or forest. Furthermore, pollinators travel long distances, so community level pollinator awareness is required – especially for smaller scale farms.

The Environmental Management and Coordination Act provides an opportunity for communities to conserve areas which provide services such as pollinator habitat for their crops e.g. coffee farmers could apply for protection of forest segments as habitat for pollinators. It is well known that large scale monocultures are linked to poor pollinator populations, and intensive land use has been shown to decrease the number of pollinator species (though the latter does increase the number of individuals).

The use of commercial bee colonies for crops is virtually non-existent here, so wild populations of pollinators are of vital importance  to the country’s main GDP earner. Despite this, here is no Red List for pollinators in Kenya and the data on the status of pollinator populations in agricultural areas are few and far between

Why Are Bees Dying

Lack of awareness amongst farmers about what their crop’s pollinators look like leads to pollinators being mistaken for pests – e.g. spraying what they think are beetles, but are actually pollinating carpenter bees in passionfruit, and thus getting a crop failure.

There is a high incidence of blanket spraying – where farmers are routinely spraying their crops with various chemicals, but are unaware of why they do this and what they are targeting. Furthermore, improper spray timing means that many are spraying when pollinators are foraging – i.e. early morning and late evening, and spraying at flowering which is counterproductive.

Spray drift and poor disposal of pesticides means that adjacent wild areas, such as hedgerows, are also affected and therefore poor refuges for pollinators.

Unfortunately, misuse of pesticides in pollinator-dependent crops leads to a decline in crop yield, which is most commonly seen in high value fruit crops. Small studies have shown that conservation of hedgerows and nearby bush or forest blocks as pollinator refuges can contribute to increases in yields of these crops. Coupled with IPM pest management techniques, farmers can see an increase in crop health and productivity at the same time as they reduce their reliance on toxic pesticides.

As farmers and agronomists, it is often uncomfortable to examine the effect of our pesticide spray activities on non-target organisms. Thankfully, it is a question that I am frequently asked when using and recommending insecticides which shows that there is a very genuine concern among growers to minimise the impact of our operations on Bees, beneficial insects and even Earthworms.

This is an enormous area, and if you will excuse the pun, I could be opening up a ‘can of worms’ here by suggesting that one chemical is safer than another.

So firstly do not dwell on the specific products below; it is a rough guide to help you understand and manage the risks.

Secondly, there are so many studies involved in toxicology, they may at times conflict in their conclusions. I have summarised the general facts to help to understand the background risks of the products you are applying.

Thirdly, application and use is everything. Applying pesticides at the right time of day, away from Bee hives, using low drift nozzles is as important as the product being applied.

Below is a list of commonly used products, and how safe they are to Bees in particular. If you are concerned about Lacewings, Hoverflys, Carabids etc, the information is out there too.

Some basic rules can massively reduce the risk to Bees. Makes sure you know where the hives are located and create a buffer zone around them to avoid direct spray drift.

Spray early morning or late evening when the Bees are not foraging in the crop – for Fall Armyworm you should be spraying at these times of day anyway.

Oil based adjuvants can affect the ability of bees to repel water and can significantly increase mortality, even with fairly benign insecticides. So be aware if using Nufilm or Codicide for example.

Many insecticides contain repellent pheromones designed to keep Bees away from danger. Mixing them with some triazole fungicides such as tebuconazole, propiconazole and cyproconazole for can mask this repellence effect and cause significant Bee mortality.

Take care if there are flowering weeds are present in the crop, even if the crop itself is not flowering.

Bonus: What about Earthworms?

Natures’ ploughmen as they are often referred can also be impacted by what we spray above ground, but in reality this is to a far lesser extent than above ground species.

It is worth understanding the impact of what we are spraying however, and some of the more risky products will surprise you.

It is extremely important to understand both the context and origins of this information. Most studies are compiled in a lab, observing earthworms directly exposed to pesticides on filter paper, and measuring acute toxicity.

In the field earthworms are not likely to come into direct contact with the pesticide immediate at or after spraying, and the chemicals are likely to be at an advanced stage of degradation before the worms pull decaying material into their burrows.

Therefore there is a significant difference between laboratory toxicity and the risk of field exposure. For chlorpyrifos which can be persistent for several weeks in the environment there is clearly a risk and this has been measured in field studies. For acetamiprid or lambda cyhalothrin for example the breakdown is very rapid, hence exposure risk is far lower.

Neonicotenoids are in fact the greatest risk by a long way, but the probability of Earthworms coming into contact with them is very very low.

The fungicide Carbendazim however has been acknowledged as posing a high risk, in part due its persistence in decaying plant matter.

This is a joint article by David Jones & Anne-Marie Steyn