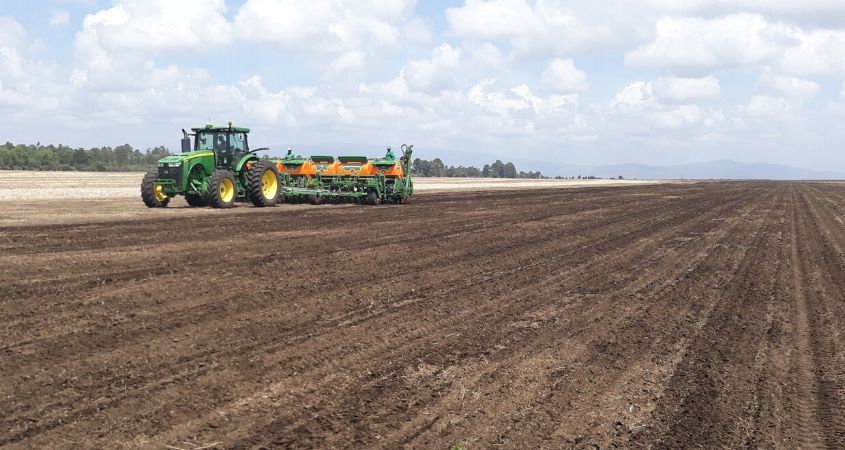 As we approach planting in many areas of Kenya, we are also approaching one of the largest expenditures of the year for most growers.

Our costings show that in 2017 our Agronomy Service clients spent between Kes 4,300 and 16,200 per hectare on fertiliser for wheat. This is a vast range, but it also reflects the variation in soils, rainfall and yield potential across Kenya.

Applied in the correct quantities, the potential of the crop is maximised and the actual cost per ton of wheat produced can be minimised as the table below shows; three different farms and different yields, but by soil sampling and creating individual fertiliser recommendations, profitability can still be maintained.

Getting the right amount of fertiliser on to maximise the return on investment is crucial, and depends on two key factors, yield potential and what is already in the soil. Yield potential and crop requirement is a matter of conjecture and amounts to a guess at the rainfall that is likely to follow.

Knowing what is in the soil on the other hand does not need to be guess work, but should be the result of a soil test. A reminder of the basics:

How To Take A Good Soil Sample

The soil sample result is only as good as the quality of the sample taken and delivered to the laboratory. Sample fields in a ‘W’ pattern across fields in order to take a representative sample across the whole field. This should be made up of at least 20 subsamples from points along the ‘W’.

If in doubt, sample any different soil types or areas of the field separately. This might include:

This debate has been raging ever since the introduction of precision farming and is a subject that most agronomists and farmers have a strong opinion on!

My belief is that neither approach is too far wrong. Grid samples are arguably easier to administer, whereas zones allow aspects of local knowledge to be brought into the sampling. The important point is to A) do something, B) review the results, and C) to look at where the gaps in knowledge are and sample further if necessary.

Areas of severe compaction or limited rooting should have been identified by now and rectified. Waiting for rain to help pull a subsoiler through is fine if the soil still shatters sufficiently, but if the soil is too wet this is likely to cause smearing and lead to further structural damage.

A ripper is the tool of choice when the field needs to be levelled and moisture loss is not an issue. The clods pulled up by the ripper will need to be broken down at some point and may require sufficient rain beforehand, but will help to open up the seedbed especially if surface compaction is an issue.

A lower disturbance subsoiler is preferable however where the topsoil is in good condition and the field is level, and where you are in a notill system. The closer you are to planting the less clods you want to create, so abandon the ripper and go to a subsoiler.

If you are ripping or subsoiling after several years of disc ploughing make sure you invest in an auto reset leg; nothing worse than spending all day jumping off the tractor replacing shear bolts!

Beware of dry planting. It sounds great in principle but where seed sits in hot soil for long periods of time germination will be reduced, losses to predation are increased, and Blue Moulds can reduce germination.

I accept that there may be little option on large farms with acreages to cover, but even if rain does come quickly there is a reliance on having enough to penetrate and germinate all of the seeds.

Dry soil also massively reduces residual herbicide efficacy, not a good thing when we are reliant on pre emergence herbicides in many crops.

Dry planted seedbeds, unless very level, can also cause increased coulter bounce and reduce the evenness of depth placement, so be cautious.

When to dry plant:

When not to dry plant:

Let’s take a look at why late germination matters to your crop yields, and how to avoid delayed emerging plants.

In one Canadian study over several years, no-till maize took on average 2 days longer to emerge than cultivated soil because of the lower temperatures. This is not a problem – as long as all of the crop emerges at the same time.

Surely all the plants catch up eventually, does it really matter? Yes it does matter. The best research I have seen is from Wisconsin State in the US, where by the way the state record yield in 2017 was an astonishing 19.8 t/ha or 88 bags per acre.

Researchers in Wisconsin set up a series of experiments where they planted varying proportions of a crop on time and delayed. For example, 75% of the plants in one plot were planted on the optimum date, then they came back 1 ½ weeks later and planted the other 25% to mimic later germination. This allowed them to measure the overall effect on yield.

The results showed a 6% yield loss. This increased to a 10% yield loss when the 25% of late plants came up 3 weeks later. Just to prove the point, where they planted ALL of the seeds 10 days late in a separate plot to produce an even stand, it was only 5% lower yield than the evenly emerged, early planted crop. Planting well is more important than planting on the perceived ‘optimum’ date.

The summary of results compared to the ‘perfect’ establishment represented by the black bar on the chart below is a strong visual reminder of the yield cost of poor planting.

So, if you have a significant proportion of the crop germinating late over 200 hectares every year from an inaccurate planter, this will easily be costing you 5-10% of your yield. On an 8 t/ha (35 bag/acre) crop this is worth Ksh 22,000 ($220) per hectare and puts the cost of the planter into perspective.

When should I consider replanting an uneven crop? That was not the whole story however… Where you have variation between the rows – which is very common when a couple of the units on the planter working too shallow, as pictured below from Pioneer USA – the yield loss is actually much less.

Even when 50% of the rows emerge late the yield loss is actually minimal – less than 5%. This is importance guidance when considering replanting. The bigger plants are sufficiently far away from the small plants in this case that the competition is minimal.

If more than a quarter of your plants WITHIN the rows have not emerged within 2 weeks of planting however, you might be better to replant if rain arrives and accept an 88% yield by planting late (the yellow boxes on the graph), rather than a 79-80% yield from a variable plant stand.

For deep Nitrogen tests, sample to 60cm at least – ideally in two depths of 0-30 and 30-60cm – to understand the amount of mineralised nitrogen in the soil. Nitrogen is a tricky element to accurately calculate the optimum dose, but by looking at the trend and whether a season or field is above or below the average seen on a farm, it is a good basis for a more informed decision on the nitrogen dose rate.

Where you have double cropped and or experienced very heavy rain it is particularly important to understand the dynamics of Nitrogen in the soil.

Too much applied Nitrogen is waste of money but also runs the serious risk of lodged crops which do not yield.

For every season, every field and indeed soil type will have an optimum dose rate of nitrogen, above which the cost of extra N applied is not returned in the value or yield of the crop.

It is my firm belief that it is not worth trying to be too precise on predicting this figure as it is highly variable. More money is lost from lost yield – through under applying nitrogen – than from lost expenditure from over applying.

Instead, I try to look for anomalies each year and store the data from previous years on every clients’ farm. If soil nitrogen tests are particularly lower or higher than average, I adjust accordingly.

Although it is very variable, work consistently shows that there is a relationship. Data points at the extremes – either very low or very high – are extremely useful to highlight situations where more or less N is needed. Just don’t over obsess with the figures in the middle of the graph.

In 2015 my colleague and friend Peter Cowlrick set the Milling Wheat Yield World Record with a 14.3 t/ha crop of Crusoe Wheat at 13.5% protein. The farm had previous used a lot of pig manure, but Deep Nitrogen tests that yield revealed only 50 kg/ha of N in the soil. This gave Peter the confidence to apply more top dressing N which he wouldn’t have otherwise done.

That’s it for now