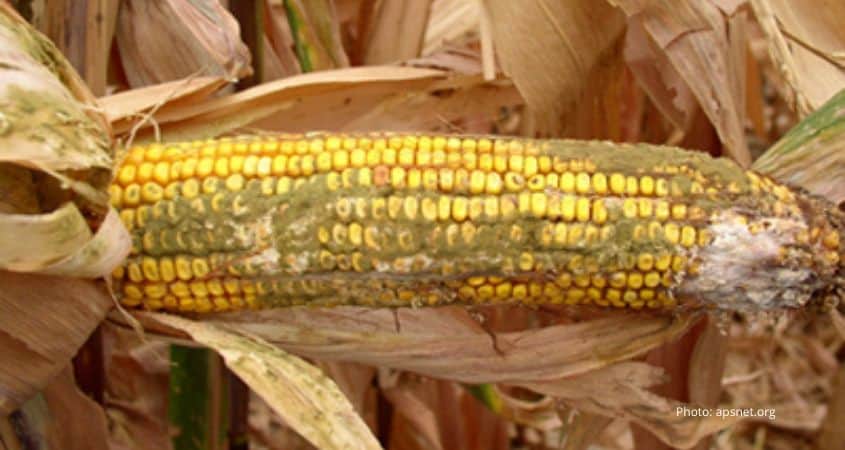 Aflatoxins are poisonous by-products produced from the fungi Aspergillus flavus and A. parasiticus. These fungi are found in the soil and are responsible for decomposition of plant materials.

Aspergillus is a mold that infects maize when stressed, but can infect other crops such as grain sorghum, peanuts and cotton. Aflatoxins are odorless, tasteless and have no color: thus, they are difficult to detect. These toxins are extremely poisonous to humans, livestock and poultry.

Four major types of aflatoxins are B1, B2, G1 and G2. Though all of these toxins are usually found in grain at a minute level, B1 is typically more abundant and causes an increased protein requirement in livestock and poultry that consume it.

Accumulation of aflatoxins is dependent on weather conditions. A dry growing environment or drought stress tends to favor the development of aflatoxins in maize. When soil moisture is below normal and temperatures are high, the number of Aspergillus spores in the air increases.

During pollination, these spores infect maize kernels either through silks (pollination tubes) or through areas of damage caused by insects, birds and weather events. Once infected, plant stress such as nutrient deficiency, continued dry weather or kernel damage during harvest may increase aflatoxin levels.

How To Avoid Aflatoxin in Maize

There is not a procedure for eliminating aflatoxin after it is produced. However, limiting or maintaining concentrations may allow the contaminated grain to be fed under proper management:

Aflatoxin consumption by livestock and poultry results in a disease called aflatoxicosis. Aflatoxins are metabolized in the liver of all living organisms. High concentrations can lead to acute liver disease or death within 72 hours. Lower concentrations have produced various symptoms, such as feed refusal, decreased feed efficiency, impaired reproduction, hemorrhaging in muscles and suppression of the immune system.

Feeding grain contaminated with any level of aflatoxin carries a considerable amount of risk. Testing for aflatoxin concentrations should be the first step in proper feeding management. Sampling technique is the most important factor in determining aflatoxin levels. Sampling grain as it is moving or being blended, such as harvesting and loading, will yield a representative sample.

Obtaining a quality sample from stored grain is difficult since pockets of highly contaminated grain can exist within that environment. Ten to 15 probes yielding 1 pound of grain each should be obtained from different sites in the bin or truck and placed in a bucket. Mix the sample thoroughly and place a 10 pound sample in a paper bag or sack that can breathe. Then send the sample to a laboratory that conducts aflatoxin tests. Each truckload and bin should be sampled separately to achieve reliable results.

The use of a black light to detect the presence of aflatoxins at the elevator is common. However, this procedure is not reliable since it detects an acid and not the aflatoxin. It is recommended that a lab analysis be performed to accurately determine aflatoxin concentrations.

The amount of aflatoxins an animal can tolerate varies with age, sex and health of the animal. Younger animals are most susceptible to aflatoxin poisoning. Pregnant and growing animals have slightly more resistance than young animals, but less resistance than mature animals.

Recommended aflatoxins levels in feed is 0 parts per billion (ppb), but this is not always possible. If feeding contaminated grain to lactating dairy cattle, immature poultry or immature livestock, do not exceed 20 ppb aflatoxin in the total diet. Calves should not receive milk from cows fed more than 20 ppb aflatoxin.

Breeding cattle, swine and mature poultry should not exceed 100 ppb in their total ration. Finishing beef cattle and swine can tolerate grain up to 300 ppb aflatoxin. Animals should not consume any level of aflatoxin in their diet for at least three weeks prior to slaughter. Any grain with levels exceeding 1000 ppb should be destroyed and not be salvaged by blending with grain of lower concentrations.

Although grain containing low levels of aflatoxins can be fed to livestock and poultry, risk is increased anytime aflatoxin is present at any concentration. If symptoms occur, discontinue feeding contaminated grain and return to an aflatoxin free diet immediately.