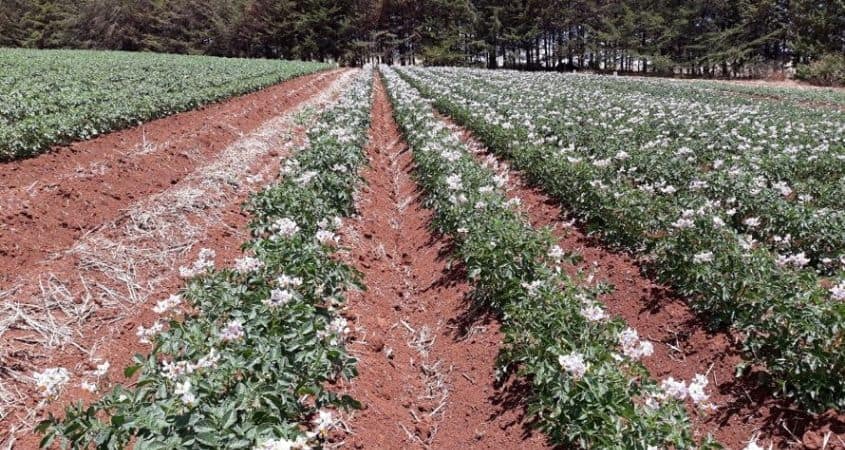 When it comes to Potato Farming, Getting weed control right in potatoes is crucial. Furthermore, weeds generally make mechanical harvesting difficult and compete with the crop for nutrients just as the tubers really start bulking. Here, we take a look at some of the weed control herbicides options to receive great yields from Potato Farming:

This is a great herbicide that controls grasses and broadleaved weeds including Blackjack, Gallant Soldier and Lamb’s Quarter (Fathen). Unfortunately after heavy rain it does have a habit of washing through the soil profile and blackening the potato leaves as they emerge. It is also weak on Amaranthus, Cleavers and Brassicas that are found in many potato soils.

Linuron on its own is not the most useful herbicide, but when added to Pendimethalin it improves control of Amaranthus, Wild Radish and provides much longer control of Gallant Solider late into the season.

In countries where clomazone is approved, it is the best product for controlling Cleavers and gives season-long control of Lamb’s Quarter, Fat Hen and Sow Thistle. Beware that it can cause the crop to turn yellow, but this is only short-term and rarely results in any yield loss. Remember that if you plan to plant wheat or maize straight after a 4 month potato crop there can be problems with herbicide carryover.

Still not available in Kenya, but a great residual herbicide which is very safe on all varieties and controls Grasses, Cleavers and Nightshade. A good mixing partner with Metribuzin.

Only safe on certain varieties so check with your agronomist first. Very broad spectrum of weeds controlled from grasses, to Wild Radish to Amaranthus, but gives poor control of Cleavers and Nightshade especially. Adding clomazone or metolachlor are good ways of filling these gaps.

Normally a maize herbicide, but where it is approved for use on potatoes it is very useful for controlling Sow Thistle and Amaranthus. Mix with other herbicides to have a broad enough spectrum of weed control.

Discontinued in Kenya, but has now gone off-patent in many parts of the world and there may be some good generics available in the near future. Good at controlling Nightshade, some grasses and Blackjack, but you wouldn’t really use it on its own – mix it with metribuzin, or on varieties that are not metribuzin safe or on very light soils (West of Kitale around Kiminini for example) such as Maris Piper or Cabaret, mix it with pendimethalin or linuron + clomazone.

For varieties like Sherekea, Shangi and Asante, a mix of metribuzin and either clomazone or pendimethalin is great on heavy soils. Just try to make sure that you don’t apply pendimethalin straight before heavy rain if it can be avoided.

The Dutch varieties such as Panamera, Voyager and Taurus are slightly more susceptible to metribuzin, so either reduce the dose of metribuzin or apply a mix of clomazone, linuron and metolachlor. If Nightshade is a real problem or if you want to plant maize within six months try linuron, pendimethalin and flufenacet.

On lighter, sandy soils where crop safety is a key concern I like clomazone, flufenacet and metolachlor.

Make sure that the soil on the ridge is settled so that the herbicide ‘binds’ to the outside of the ridge – waiting for a few millimetres of rain before spraying can help. Good quality nozzles are also crucial to get accurate spray coverage. Herbitech jets or Defy 3D nozzles are ideal for this.

*Always make sure that the products are legally approved for the crop in your country or location, and follow the label instructions.

Mealy Cabbage Aphids in Canola (or any Brassica)

Know your enemy! This is the Mealy Cabbage aphid and it builds up in sticky, dense colonies on the growing tips of your canola. The direct feeding damage causes yield loss – up to 33% in one Australian trial I came across. It is worse in dry conditions when the plant is struggling, so be aware of these quick, important points:

With a big reduction in the amount of barley planned for next season, there will be lots of situations where wheat is planted after canola. Canola is a fantastic break crop that reduces Fusarium, Take-all and other soil borne disease, but farmers often comment that wheat after canola can struggle in the early stages compared to barley after canola.

Canola can have a slight allelopathic effect in the soil (release of chemicals that slightly inhibit other plants), and it can reduce nitrification in the soil. This should not put you off planting wheat behind last season’s canola fields however, as the yields will still be massively improved compared to successive wheat crops.

There are some simple steps you can take to reduce the effects on the wheat:

Firstly get the nutrition right for the wheat. Test your soil and make sure enough phosphate is available in the seedbed. If you are intending to dry plant, make sure that the fertiliser is dry planted too. Very often growers make sure the seed is dry, but the fertiliser is placed just into moisture where it can start to lock up rapidly as it reacts with iron and aluminium.

Secondly cultivate in good time. Not for those practicing notill, but getting the canola residues to break down and ensuring the soil structure is good will really help. The worst thing is disc ploughing, leaving a solid layer of canola residue in the dry and reinforcing any hard pans in the soil that the wheat roots have to struggle through.

Apply a small dose of early nitrogen at 2-3 leaf stage – don’t go crazy, but 30 kg of nitrogen can help the crop.

A cover crop planted after the canola and ahead of the wheat, containing Sunflowers which are highly mycorrhizal, is cheap and helps the wheat access phosphate. It is very cheap, just be sure to terminate it 60 days after planting so it doesn’t steal too much moisture.