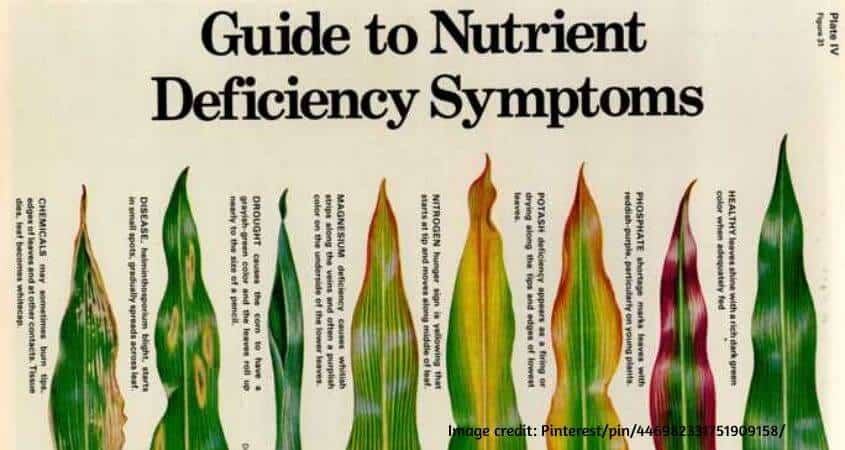 Nutrient deficiency disease symptoms in plants is a common puzzle among crop farmers. In order to determine which nutrients are deficient in your soil and understand your soil better, consider doing a soil analysis for your crops. What follows is a description of visual symptoms of deficiency diseases in plants due to lack of nutrients. While useful as a starting point to diagnosing production problems, keep in mind that multiple nutrition disorders often occur simultaneously.

When it comes to Nutrient Deficiency, Protein is essential for all living organisms and is required for growth and development. Nitrogen is one of the main elements in protein, Nitrogen is also a component of nucleic acid, DNA, RNA, genes, chromosomes, enzymes, chlorophyll, secondary metabolites (alkaloids), and amino acids. Nitrogen accounts for about 1 to 6 % of plant dry matter, depending on the species.

Nitrogen nutrition deficiency slows down the growth and development of plants. Nitrogen deficiency symptoms in plants manifest in a distinct manner. The plants appear stunted with light green lower leaves, while the upper leaves remain green, With prolonged Nitrogen nutrition deficiency, yellowing (chlorosis) of older or lower leaves occurs. This is followed by leaf tip death and leaf margins developing a brown discoloration (necrosis). In some instances, the leaves fall off. The plant sterns become woody.

Phosphorus provides energy in the form of ATP and NADPH for plant metabolism (photosynthesis and respiration). Additionally, it is a component of DNA, RNA, nucleotides, and cell membrane.

Nutrient Deficiency symptoms of Phosphorus in plants. Initially, plants with P nutrition deficiency appear darker green with reduced growth affecting the leaf size and stem thickness. As Phosphorus nutrition deficiency continues, the older, lower leaves develop irregular spots of brown to dark brown dead tissue. In some plants, reddish to purple pigmentation may appear on the under or upper surface of leaf margins, lower leaves, and stems. Eventually, leaf death of older leaves may occur. In most cases, lack of phosphorus delays flowering in plants.

Potassium deficiency in plants manifests in several ways. The leaves of potassium deficient plants are small and dark green. The plants have short internodes resulting in a compact plant appearance. These symptoms are followed by a sudden development of irregular necrotic tissues along the leaf margins and tips of lower, older leaves and eventually covering whole leaves, making the leaves appear scorched. Also, leaves curl downwards.

Unlike other nutrients, calcium deficiency generally affects the growing points and young leaves of the plants. The young leaves are often twisted or wrinkled. The growth is reduced with tiny black spots appearing around the mid-leaf area of young leaves and on the tips of very young leaves. In some cases, these black spots appear o the growing points. Abortion of flowers or flower buds is common if calcium is unavailable during flowering. During fruiting lack Calcium nutrition can result in fruit cracking or in water-soaked tissues. Calcium deficiency in tomato plants normally results blossom end rot disease.

Symptoms of sulfur deficiency in plants: Initially, uniform chlorosis of light greenish-yellow pigmentation develops anywhere between the young and mature leaves, but rarely on lower, older leaves. As the symptoms advance, uniform chlorosis spreads to rest of the leaf area.

Iron is an important component of sulfur proteins. DNA and RNA synthesis is restricted under iron-deficient environments. Iron is also involved in chlorophyll formation. Iron is considered an immobile element in the plant, and as a result, iron nutrition deficiency symptoms in plants develop on young leaves and shoots.

Iron deficiency symptoms in plants symptoms: Generally young leaves develop interveinal chlorosis, from the base, but in some as from the tip. Over time, interveinal chlorosis intensifies and the pattern becomes less interveinal. Even the stems appear chlorotic. At this point, the chlorotic symptoms are irreversible even if correctional measures are taken. Eventually, yellow gives way to white. The bio-availability of Fe is pH dependent; the lower the pH higher the solubility and hence the ability of iron to plants.

The requirement of Molybdenum for healthy plants is only 0.1 ppm in the form of Mo(VI) and is available only at high pH (> 6.8). It is involved in the initial step of inorganic nitrate (NO3) assimilation. Therefore, Mo is critical when nitrate is supplied rather than ammoniacal (NH4- N) N. It is important in the biosynthesis of the phyto-hormone abscisic acid, which is required in drought conditions.