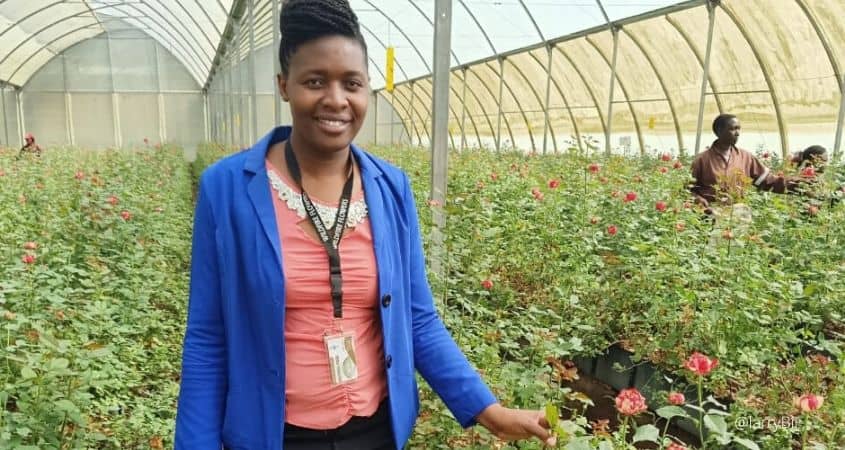 This is evident in the increasing pressure on growers to grow healthy flowers, fruit and vegetables with less and less chemical pesticides. The export markets normally check for pesticide residues in the produce and high MRL levels can limit market access. With the new Horticultural Standards in Kenya being gazetted – there is also more pressure from the local markets on pesticide use and residues..

Before the First World War, pest and disease control was achieved through a combination of proper crop husbandry, crop rotation and sulphur and copper. During the First World War, a great deal of research was done on chemicals for chemical warfare. An off shoot of this research was production of chemicals that were effective for pest and disease control in crops.

There was a major agricultural revolution. Pest & diseases were controlled,  and food production became more secure and yields increased. It was only years later that we became aware of the side effects of these chemicals on human health. Not all chemicals are bad, and without proper pest and disease control we would be unable to feed the world. However, it’s important to grow responsibly and minimize pesticide use where we can.

Before the First World War a great deal of research was done on the role of plant nutrients in plant disease and pest management, and this work is now being re-visited and expanded on.

Many diseases start due to problems with rooting, soil structure, no oxygen, lack of drainage and water logging. A deep, well drained soil with a good crumb formation is your first line of defense against plant diseases. Next the moisture levels and temperatures play an important role in ‘activating’ pathogens. Generally higher moisture levels and temperatures encourage diseases and reduce the egg to egg time of insects’ life cycles. Sadly, in East Africa we do not have the luxury of cold winters – that can kill off many diseases and insects.

Next, the soil pH has a great deal to do with how fast a disease progresses.  Acidic soils tend to suppress quite a few diseases – however they also suppress nutrient availability and crop yield – so approach with care. The soil, water and drip pH determine the availability of nutrients to plants and can create excesses and deficiencies that can encourage insect and disease growth. It is better to keep the pH at the optimum for the plants requirement to grow a healthy disease resistant crop.

Proper plant nutrition is your next line of defense. Any nutrient that is deficient or in excess will increase a plants susceptibility to diseases and pests. Nutrients that are known to influence pests and diseases in plants are: – the Nitrogen form, Potassium, Calcium, Sulphur, Chlorine, Nickel, Manganese and Silicon.

Calcium is a primary disease controlling nutrient.  The amount of calcium in the soil determines many things!  1) The pH, 2) The structure 3) The aeration. Check Calcium levels and ensure you have at least enough and at best luxury levels.

Calcium in the plant is used to make Calcium Pectate – this determines how strong the cell walls are, and how resistant they are to insect and disease attack. Many diseases in many crops can be prevented by having enough Calcium in the plant tissue. Low calcium in the soil results in compacted waterlogged soil, with poor nutrient uptake efficiency and weak stressed plants.

Calcium is known to suppress club root in cabbage, fusarium wilt in tomatoes, erwinia soft rot in potatoes and botrytis blight in many fruits and vegetables. Adequate Calcium is essential for good shelf life of produce.  Calcium is taken up via the transpiration stream and can become definition in cool, overcast or humid weather conditions.

Potassium plays a major role in insect and disease suppression. Potassium deficient plants are very susceptible to both diseases and the weather!  In many areas we are lucky to have enough or excess potassium in the soils.  However, it can become easily fixed into certain soil types, e.g. illites and clays.  Unlike most plant nutrients – potassium does not become a part of any plant constituent and remains present in the plant sap. It is very mobile in plants and quickly moves from the older to younger leaves and to identify a deficiency you need to do a leaf analysis on both and compare.

Excess potassium can also suppress or encourage diseases depending on the total nutrient status of the plant. In general potassium will suppress most diseases but can encourage Erwinia rots, downy mildew and nematodes.  The Nitrogen: Potassium (N:K) ratio is also critical for some diseases and insects. A high N:K ratio can encourage diseases. A high K:N ratio tends to reduce disease severity and in conjunction with adequate phosphorous can reduce reproduction in aphids.

Nitrogen excesses tends to produce weak, fast growing plants that are very susceptible to insects and disease damage.  Most damping off disease occur due to excess nitrogen, high nitrogen encourages botrytis in plants that would normally be resistant to it. The form the nitrogen is supplied to plants in can also have a major effect on disease resistance. Nitrogen can be absorbed by plants as the reduced NH4 form or the oxidized NO3 form.  NH4 reduces pH while NO3 increases pH.  Diseases react differently to the N-form. Nitrate suppresses Fusarium wilts and Rhizoctonia root rots while ammonium suppresses most other soil borne diseases.

Chlorine is not generally considered a plant nutrient and can be toxic to many plants. However, research has found that in chloride resistant plants, chlorine can suppress plant diseases e.g. fusarium crown rot in asparagus, Rhizoctonia crown rot in beets, Fusarium Yellows in celery, and smut and stalk rot in corn. In most cases an increase in chloride resulted in an increase in manganese in the leaf tissue.

Managanese. Plant testing and research has shown a good correlation between the concentration of Manganese in healthy plant tissue vs diseased plant tissue. Fungal and to a large extent, bacterial diseases are reduced in the presence of adequate manganese uptake, while viral diseases may be enhanced by enhanced plant uptake.

Manganese tends to be abundant in the soil, the limiting factor being the efficiency of uptake. Practices that improve manganese uptake tend to reduce diseases. Mulching, optimum pH, organic matter, soil temperatures and microbial activity in the soil. Glyphosate can reduce manganese uptake and encourage take all. Potato scab is mitigated by lowering soil pH, irrigating or foliar feeding manganese.  Some fungicides e.g. Mancozeb are much more effective in the manganese form.

Nickel is required in very small amounts and is generally sufficient in most horticultural soils.  It is considered an ultra-micronutrient and not much attention has been paid to it.  It is thought that nickel is important for nitrogen cycling in plant tissue and for eliciting the plants immune response by helping with phytoalexin production.  Nickel salts are effective fungicide sprays against rust.  Nickel uptake can be reduced in cold dry soils and in the presence of excess zinc, copper, manganese, iron, cobalt, magnesium and calcium.  More work needs to be done on nickel.

Sulphur is very important in disease control – it is required to induce the plants natural resistance to fungi through triggering natural metabolic processes.  This is now termed SIR – sulphur induced resistance.  Sulphur also has a topical toxic effect on funguses and mites – hence the use of sulphur burners in some greenhouses.

Silicon is the second most abundant mineral in soil.  Adequate levels of silicon in the plants impart a healthy resistance to most diseases, and the source and rate of applied silicon can strongly affect the control of many fungal diseases in many plant species.  Effective / affordable / and practical solutions are required for application of silicon to crops that can accumulate it, as it has been recognized that the use of silicon in pest and disease control would be a viable method of reducing fungicide use in many areas of agriculture.  More research must be done on this.

Silicon in various forms has proved to be an effective method of insect control.  High levels of accumulated silicon in stalks and leaves can discourage chewing insects, silicon can dissolve chitin, causing dehydration in insects, and silicon can block insects spiracles – preventing oxygen from getting into their bodies.

As you can see – the plant nutrition plays a huge role in determining plants’ tolerance to insect and diseases, and much can be done with optimizing plant nutrition to reduce pesticide use. For more information on this, and to test the nutrient status of your plants please contact us on [email protected]