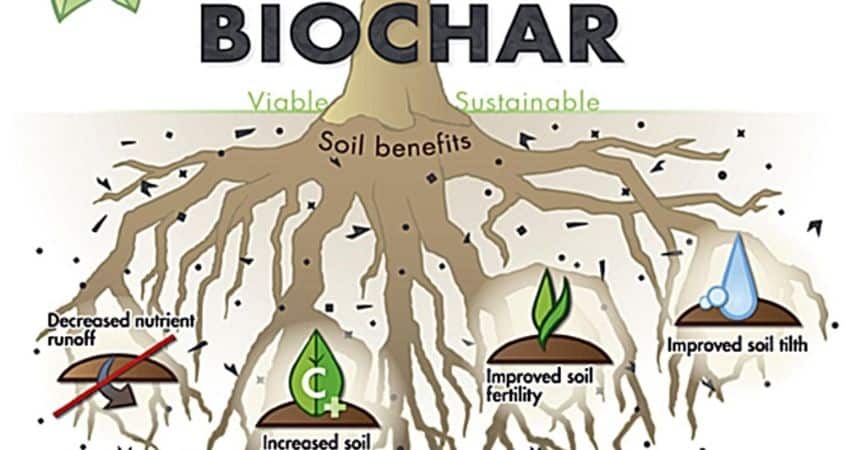 Biochar is the new buzzword in farming.  What is it?  Biochar is basically ‘charred’ agricultural waste created through slow-burning of organic matter in the absence of oxygen (pyrolysis).  This creates a porous, high carbon, stable material that can be added to the soil to improve soil properties.

A good example of positive use of biochar is terra preta – a ‘man made’ Amazonian dark earth that is highly fertile, and is thought to rebuild itself by a huge 1 cm a year.  Terra preta was created by Amazonian Indians around their settlements.  It contains large amounts of biochar, from slash and char farming, forming a low temperature, porous, very stable charcoal.  The charcoal remained in the soil for thousands of years, binding and retaining minerals that would otherwise have leached out. In addition to the biochar the soil contains large amount of pottery shards, plant waste, fish, animal and human waste that support large, diverse populations of soil microbes.  These re-cycle and capture nutrients, keeping the soil alive and growing.

Terra preta was a deep, highly productive soil that sustained a large population of people in one area, feeding them and getting rid of their waste sensibly, and allowing them to settle in civilized groups. Terra mulaga, terra preta’s baby brother, is a lighter soil, created further away from the settlements, contains only biochar and is less fertile than terra preta, but still much more fertile than the parent soil. The original soils were infertile, and only able to support small groups of farmers for a short time, so farmers were constantly having to move on, using slash and burn farming techniques.

Deep, dark, productive Terra Preta on the left, vs the original infertile oxisol on the right

What are the benefits of biochar?

Biochar is alkaline and raises soil pH in acidic soils.  This increases the availability and efficiency of use of nutrients and mineral fertilizers.  Studies of the effect of biochar on the pH of alkaline soils are in progress.

Biochar has a large surface area to volume ratio and is highly negatively charged. This holds onto positively charged cations in the soil, increasing the cation exchange capacity (CEC) and soil fertility.  This, in turn, holds more anions, thus dramatically increasing the retention and reducing leaching of nutrients from the soil.  In the hot humid tropics, where organic matter decomposes fast and high rainfall leaches sandy soils, biochar can make the difference between subsistence farming and productive farming.

Biochar adds nutrients to the soil

Studies have shown that the addition of biochar to soils can greatly increase its water retention capacity.  This is due to the high surface area and porosity of the biochar. Soils with increased water holding capacity produce higher crop yields and require less irrigation. In rain-fed crops, increased water holding capacity can make the difference between producing a crop or not. Soil water enhancement depends on soil type, biochar properties, and application rates.

Biochar contains up to 80% carbon black. Adding it into the soil raises the carbon content and the C:N Ratio. The carbon % of the biochar depends mainly on the pyrolysis process and the carbon content of the feedstock. Beware! Adding large amounts of carbon black into the soil without due analysis and planning can create a very high C:N ratio, which results in nutrient lockup, yellowing crops and negative effects on crop yields. Biochar can be pre-weathered and loaded with microbes & nutrients by adding into compost/biogas sludge.

The high porosity of the biochar, combined with its water and nutrient holding capacity, means that it creates a safe haven for microbes in the soil and allows them to perpetuate through fallow and drought periods.  Biochar can also supply a suitable energy source for some microbes.  Increase in microbial activity has so many benefits to plants:- increased nutrient re-cycling reduced leaching, making nutrients more available to plants,  capture of nitrogen from the air, retention and addition of carbon in the soil, reduction in pests and diseases.  This manifests as a general reduction in the requirements for synthetic fertilizers and pesticides, with knock-on commercial and environmental benefits.

Bioremediation by reduction of toxins in the soil

Increased microbial activity breaks down toxins and pesticide residues in the soil.  Biochar ‘chelates’ certain pesticides, de-activating them so that they can be digested by microbes.

The increased CEC, microbial, and root activity that occur in biochar-amended soil help form soil aggregates and a more stable permeable physical structure. This increases water infiltration and storage which is good for drought mitigation.  A porous soil allows for better gas exchange, with carbon dioxide moving out, oxygen moving in and better nitrogen exchange and promotes root growth.

Increased nutrition retention in the soils results in less leaching of soluble fertilizers and chemicals into groundwater.  Increased microbial activity and chelation deactivates pesticides.  Improvement in the physical structure results in less runoff and erosion. A general reduction in fertilizer and chemical use greatly reduces the risk of agricultural pollution.

Healthy soils = healthy waterways.  Eutrophication in Mississippi River due to leaching and run-off of fertilizers.

The conversion of biomass carbon to biochar leads to sequestration of up to 50% of the original carbon in a stable form that is resistant to decomposition and can remain in the soil for centuries, the remaining 50% can be used for food and energy.  Conversely, 3% of carbon is sequestered from burning and less than 20% from biological decomposition.  Therefore there is huge potential to sequester carbon in agricultural soils with a positive impact on the soils.  There is much debate on the carbon credit value of biochar and some crucial points should be held in mind.  The use of agricultural waste that would otherwise be burned or composted results in a positive carbon sink.  Cutting down forests to make biochar is NOT carbon positive and very detrimental to the environment!  Using the heat and gases produced during the pyrolysis process increases the carbon positive effect.

Biochar should be used sensibly and sustainably from renewable carbon matter. The farmer should take into account the properties of the biochar and the soil when adding it as a soil amendment.  Biochar should be mixed into the soil to prevent it from becoming a pollutant in itself.

Talk to us today on [email protected] for any further enquiries