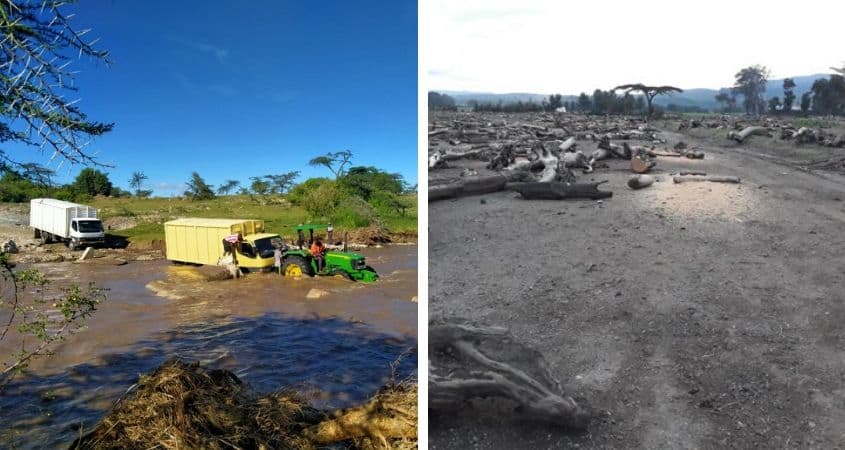 You may think that the common factor between drought and flood in many places in Kenya is water, especially lately.  Other than the lack or abundance of rain, the major reason for droughts and floods is the soil’s health status and its inability to absorb, store and release water.

Agriculture currently accounts for about 20% of the land use.  Agriculture is essential for human existence.  Without food we wouldn’t be here.  The human population continues to grow, with an increasing demand for food.  This puts pressure on the current agricultural area and we see forests and environmental land being cleared to increase this production.  In addition to this, bad agricultural practices on marginal land, continue to turn agricultural land into arid land.  Further putting pressure on our forests and ecosystems.

To start with we need to protect and increase our forest areas.  Forests in our mountain ranges and hilltops are essential for regulating two climate patterns.  Water and wind.  The trees act as wind breaks and slow the wind down.  The vegetation, roots and soft thick soils absorb heavy rainfall like a sponge and slowly release it into our streams and rivers, supplying water in the dry season and reducing floods in the wet seasons. Hence, the common term “water towers”.  In addition to this, trees can capture water out of the air by condensation, creating a natural drip zone, even without rain.  Forest soils are very fragile and rely on their full ecosystem for their fertility and water holding capacity.  Clearing forests irreparably damages the soil and the efficiency of our natural water towers.

A healthy soil is a productive, stable soil.  So, protecting and enhancing the soil health in agricultural land brings financial returns to farmers as well as helping in the mitigation of natural disasters and climate change.  This is true for cropped and grazed soils.  In the process of absorbing and releasing water, healthy soils naturally reduce the likelihood of droughts and floods.

What soil properties are important factors in determining how much water is held?  Well, soil texture is important – the amount of clay, loam and sand.  But we cannot change this easily.

Soil depth is most important.  A shallow soil holds much less water and quickly produces run off (floods and erosion).  We need to protect and build up our soils, to reduce erosion of valuable topsoil and increase the soil depth.  Soils that have been eroded down to bed rock – hold no water at all.  Soils can be artificially shallow due to a plough pan or compacted zone created by tillage for crop production.  The disk plough is a big agronomic disaster. The disc plough turns the soil over and buries the biologically active, organic matter and nutrient rich topsoil away from the plant roots, it generally creates a plough pan at 15-20 cm deep.

“Regular use of disc ploughs reduces soil aggregates to small particles and produces a compacted layer or plough pan which prevents air, water or roots penetrating the subsoil. When it rains, soil particles on the surface collapse together to form a crust which repels air and water and prevents water infiltration.”

In a soil that is 1m deep, with a water holding capacity of 100 mm/m, the land can absorb 4 inches of rain or a million liters of water/ha.  A soil with a plough pan at 20 cm can only absorb a fifth of this, creating 800,000 liters/ha of run off.  A crusted degraded soil holds no water at all, creating a million liters of run off (a flood!).

The land’s ability to hold and absorb water depends on several properties that are influenced by human activity.  It goes without saying that rooves and hard road surfaces create nearly 100% run off that must be captured / diverted / controlled by good planning.

In soils, the moisture holding capacity and soil ‘strength’ depends on the following features that we can control: soil porosity, organic matter content, chemical makeup, roots, and crumb structure.

Soil porosity is defined as the number of pores, voids, open spaces between soil particles.  The pores hold air and water.  Pores spaces may be formed by the movement of roots, earthworms and insects through the soil.  The more porous the soil, the better the water can infiltrate.  The greater the volume of pores, the higher the storage capacity of the water.  Healthy soils with good porosity, absorb and store water deep into the soil, reducing flooding.  The same pores allow the roots to penetrate deep into the soil to mine the nutrients and stored water required for growth – so that plants can grow and transpire in the “drought”.  Mechanical, human and livestock movement over the soil can substantially compact the soil and reduce soil porosity.

Organic matter content improves the strength of the soil by holding the soil particles together creating a strong porous crumb structure that resists erosion, improves water infiltration and increases the soil’s inherent ability to hold water.  Organic matter acts like a giant sponge and can hold 400X more water than sand.  A 1% increase in organic matter can increase the soil moisture holding capacity by 4%.  Modern farming practices of tillage and inorganic fertilizers quickly burn out the organic matter and reduce the soils’ ability hold water and fertilizers and to grow high yielding crops.  A healthy soil should have at least 3-5% organic matter.  This, on its own, can absorb about 3-500,000 liters/ha water & sequester several tons of carbon/ha– alleviating climate change.

The chemical makeup of the soil is very important for its crumb structure, strength and porosity.  Inorganic soil particles are negatively charged need positively charged particles to hold them together – these include the soil cations and organic matter.  Organic matter contains large particles with many positive charges and very effectively binds the inorganic soil particles together.  Calcium (large) and magnesium (small) have two positive charges and can hold two soil particles together, potassium and sodium have only one positive charge and are very small, they can disperse the soil – crusting it and a substantially reducing water infiltration.  The amount and the ratio of the positively charged cations determines the soil structure, strength, and water infiltration: – reducing wind and water erosion, loss of topsoil and floods.

Adding just NPK to the soil and not considering the nutrient removal of all the soil nutrients, mines the soil of valuable cations, can cause acidification, loss of structure and big reductions in yields, root structure and plant cover.

Overgrazing substantially reduces the soils ability to absorb water, by removing the plant cover, root structure and organic matter, by carrying the soil nutrients off the land, and by plugging the soil pores and crusting the surface through the action of the hooves walking through the soil.  Overgrazed soil quickly deteriorates, does not absorb water that is required for the grassland to regrow and produces a great deal of run off.  In Kenya, and other hot countries, we see a big salt accumulation in overgrazed soil, due to excess evaporation, to the point that soils quickly become crusted and arid, and unsuitable for anything.

So, what can we, as farmers, do to reduce droughts and floods?  Good agricultural practices to build deep healthy soils!  Test the soils, balance the cations, increase the soil organic matter, use no till or reduced till farming methods, plant trees, maintain forests and grasslands, rotate deep rooted crops, manage crop residues so that the soil is never bare, don’t overgraze and most importantly manage for healthy soils that will give you high yielding, healthy crops and grass lands.

CropNuts runs a soil testing lab so that you can monitor your soil health for better soil structure and higher yields, and an Agronomy Consultancy Service to improve your agronomic practices.  Contact us at [email protected]

The ABC of Cover Crops

Cover crops are planted to cover the soil rather than for the sole purpose of being harvested. Commercial cropping and removal of crop residue leaves the soil surface bare until the next crop is planted. Bare soils are very fragile and prone to erosion, capping, heating, and degeneration. Bare soils cause floods and dust storms. […] 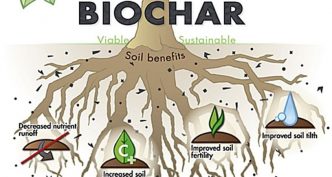 Biochar is the new buzzword in farming.  What is it?  Biochar is basically ‘charred’ agricultural waste created through slow-burning of organic matter in the absence of oxygen (pyrolysis).  This creates a porous, high carbon, stable material that can be added to the soil to improve soil properties.  The claims for the benefits of biochar are […] 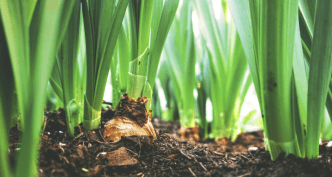 Building The Resilience Of The Soil

Soil is important not just for growing plants and supporting our farmers, but it plays a major function in the health of the planet. Soil provides us with what are known as ecosystem services, essential for global health. The resilience of the soil is its capacity to recover and bounce back after a change of regime […]